As for the latest Iraq announcement, George Will likens it to a hail-Mary pass. The President has led us into a no-win situation based on a strategy that continues to be supported and indeed shaped by a group of neo-conservatives, such as William Kristol of the Weekly Standard, Frederick Kagan of the Enterprise Institute, and retired General Jack Kean.


As Frank Rich writes today,. Kagan, a military historian, was sent by the White House to sell his policy to Senate Republicans.

It was he, Mr. Kristol and the retired Gen. Jack Keane who have most prominently pushed for this escalation and who published studies and editorials credited with defining it. Given that these unelected hawks are some of the same great thinkers who promoted the fiasco in the first place, it is hard to imagine why this White House continues to listen to them. Or maybe not that hard. Kagan wrote in The Los Angeles Times in So the Boneless Wonders will push a nonbinding resolution to, as Joe Biden put it, "demonstrate to the president he's on his own.

Storm from the East. Mirror of the Arab World: The End of Iraq. Place of Women In Saudi Arabia. Syria, Iran, and Hezbollah. A History of Modern Iran. The Discreet Charm of the Islamic Caliphate. The History of Iran. The East Mediterranean Triangle at Crossroads. Men and Women who Shaped Syria — War in the Gulf, America in the Middle East. The History of Egypt, 2nd Edition. The Mirage of Peace. Our impact ACN is a family composed of people around the world; all united we can help in more than countries every year. ACN supports projects undertaken by the local Church — bishops, priests, religious communities and lay people — which have the specific aim of providing pastoral and spiritual support to Catholics all over the world.

ACN only helps projects that have been approved by the local bishop in the case of diocesan and parish projects or religious superior if the project is fully internal to the religious congregation.

The monks fled, but quickly returned after they had got over the initial shock. Hundreds of Christian refugees lived with them for months — just a few kilometres in a direct line from their worst enemies. God was with us. This is where the henchmen and the Peshmerga, the military forces of Iraqi Kurdistan, faced off for more than two years.

The IS fighters frequently fired mortar shells at the monastery. When the weather was poor, they regularly tried to take the monastery, but were prevented from succeeding through bombing by the US-led coalition. Since late , the villages and towns have been freed from IS, one after the other. The Nineveh plains have also been liberated. The monastery is no longer in danger. But how are the faithful doing? The rest have all left the country. In response to statements made last autumn by Mike Pence, the vice president of the United States, concerning US plans to send aid directly to persecuted minorities in Iraq instead of first going through the UN, Archbishop Moussa waves dismissively.

What we Christians in Iraq need is action. The man of God looks haggard as he talks about his meetings with those in power in the Iraqi provincial government and police. According to Moussa, he was received warmly and they listened attentively as he spoke of the concerns of his community. But nothing came of it except a cup of coffee. It is a personal decision. All that is left there today are a few empty churches. That could happen to us here as well.

The jeep takes us back down the winding road to the plains. Flocks of sheep graze on the dry land to the left and right of the road. This year, a severe drought has given them even less to eat than usual. We have to pass through a Kurdish checkpoint to enter the parts of Iraq controlled by the central government in Baghdad. We continue 20 or 30 kilometres through the ethnic mosaic of northern Iraq. Most of them lived on the Nineveh plains. The villages inhabited by mostly Shia Shabak are noticeably humbler and more dilapidated than those of such groups as the Christians. The Shabak also fell victim to IS hatred.

But, in contrast to Christians, Shia have powerful friends.

Not only in Baghdad, which is dominated by Shia politicians. Ajatollah Khamenei, the supreme leader of Iran, waves to the people from billboards. His reach extends all the way to here. The Iranian ambassador has already paid a visit. 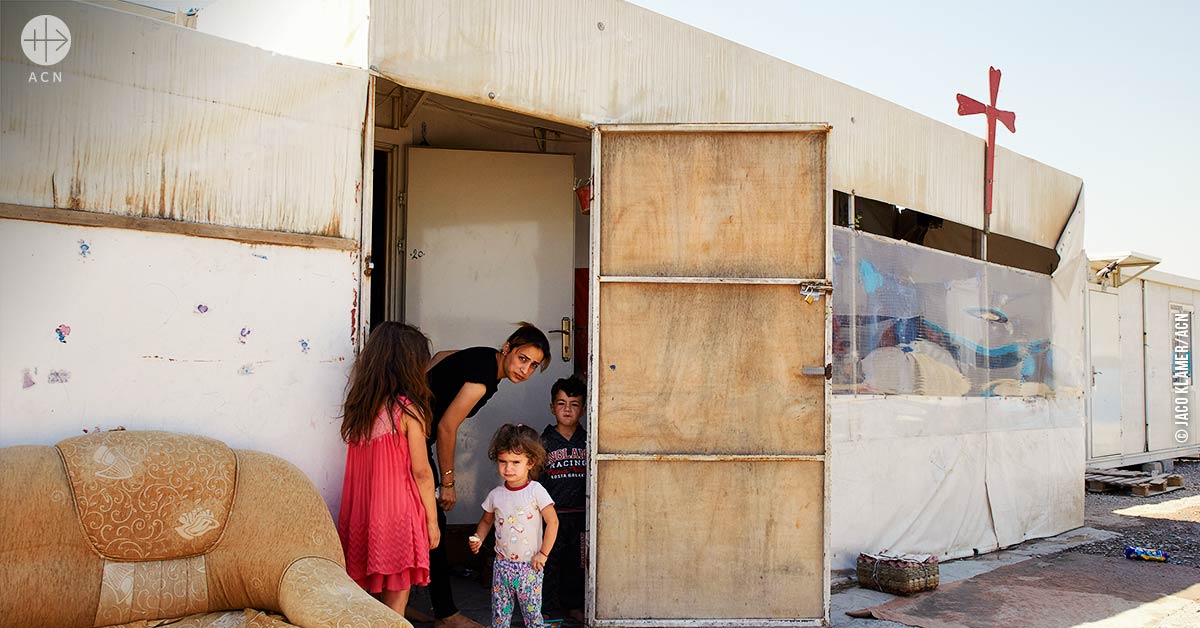