And the Lord God your Host suggesteth that the flesh of cattle goeth well with that of the fin and the claw; thus shall Surf be wedded unto Turf. And God saw everything he had made, and he saw that it was very good; and God said, It just goes to show Me what the private sector can accomplish.


With a lot of fool regulations this could have taken billions of years. And the evening of the fifth day, which had been the roughest day yet, God said, Thank me it's Friday. And God made the weekend. Thus the heavens and the earth were finished, and all in five days, and all less than six thousand years ago; and if thou believest it not, in a sling shalt thou find thy hindermost quarters 2.

Likewise God took the dust of the ground, and the slime of the Sea and the scum of the earth and formed Man therefrom; and breathed the breath of life right in his face. And he became Free to Choose. And God made a Marketplace eastward of Eden, in which the man was free to play. And this was the Free Play of the Marketplace. Investeth thou in the trees of Life, Liberty, and the Pursuit of Happiness, and thou shalt make for thyself a fortune.

For what fruit thou eatest not, that thou mayest sell, and with the seeds thereof expand thy operations. But the fruit of the tree of the Knowledge of Sex, thou mayest no eat; nor mayest thou invest therein, nor profit thereby nor expand its operations; for that is a mighty waste of seed. And the man was exceeding glad.

Who then shall labor in this Marketplace? For I am no management, being tall and well-formed and pale of hue? And out of the ground the LORD God formed every beast of the field and every fowl of the air, and brought them unto Adam to labor for him. And they labored for peanuts.

Then Adam was again exceeding glad. And he caused a deep sleep to fall upon Adam and he took from him one of his ribs, which was an spare rib. And he brought her unto the man, saying: This is Woman and she shall purchase your fruit; and ye shall realize a fortune thereby. For Man produceth and Woman consumeth, wherefore she shall be called the consumer. And they were both decently clad, the Man and the Woman, from the neck even unto the ankles, so they were not ashamed.

And when the woman saw the fruit of the Tree of the Knowledge of Sex, that it was firm and plump and juicy, she plucked thereof, and sank her teeth therein, and gave also to her husband, and he likewise sank his teeth therein. And the eyes of both of them were opened, and they saw that they were not naked.

And the woman lossened then Adam's uppermost garment, and he likewise loosened hers; and she loosened his nethermost garment, and the man then loosened her nethermost garment; until they were out of their garments both, and likewise of their minds. And as they did rock and roll, the serpent that was cunning did play upon a stringed instrument of music, and did smite his tail upon the ground in an hypnotic rhythm, and he did sing in a voice that was like unto four voices: She loveth you, yea, yea, yea.

And they did both twist and shout, and fall into a frenzy, both the man and the woman, and lay themselves upon the ground, and commit there abominations. And when they were spent from their abominations, they did take the herb bearing seed, and did roll it and smoke it; and lo!

And the LORD God said unto the snake in the grass, Thou art an permissive beast; wherefore art thou cursed to crawl upon they belly, and be made into belts and boots and handbags hereafter. Unto the woman He said, Since thou has harkened unto the snake in the grass which is broad-of-mind and permissive; henceforth let it be thy lot to be confused and scattered in thy brains, and to be plagued by demons who shall tempt thee to become that which thou canst not be: And since thou has put aside the decent clothing wherein I clad thee, here after no garment shall satisfy thee, and thou shalt be overcome by longings to change thy raiment every spring and fall.

And unto Adam he said, Woe unto thee who hast harkened not to the voice of the LORD thy God, but rather to her who is thy inferior; for thou wast free to choose.

The Bible is Fiction: A Collection Of Evidence - Daniel Miessler

Now shalt thou be banished from the Marketplace and the Free Play thereof; In the sweat of they face shalt thou earn thy bread, and bankruptcy shall be thy lot; and upon thy back, as a burden unto thee, thou shalt bear Big Government; for thou has sinned. But he turned and spoke softly unto Adam and his wife Eve, saying, Knowest thou something? Mine only hope is this: That someday, ye have children who do unto you the way ye have done unto Me. Do you honestly think, based on the similarities above, that those who wrote the Genesis story had not heard the Gilgamesh story?

And if they had heard it, and they were simply rehashing an old, very popular tale, what does that say about the Bible? Perhaps even more compelling is the story of Christ himself. It is instead nothing more than a collection of bits and pieces from dozens of other stories that came long before.

Here are some examples. The problem, of course, is that these previous narratives existed hundreds to thousands of years before Jesus did. Not only was the Bible taken largely and blatantly from previous stories, but there are contradictions so massive that they defy belief.

Here are just a few of them. The story of the Ark is that a pair of every animal on earth was put on the ship.

And where did they keep the food? How did they keep the poisonous snakes from biting the other animals? And there are plenty of indications that Jesus had brothers and sisters. The authors of the Bible are trying so hard to get Jesus born in Bethlehem that they craft a story about a census. The author of the story put it in there because they needed Jesus born in that city.

Jesus and the Family: The Bible says honor your father and mother, yet Jesus says you must hate your father, mother, wife, children, and even your own life to be a disciple, and says to call no man on earth your father. God says killing is wrong, yet he advocates genocide. We all know slavery to be wrong, yet God openly advocates it. God told Abraham to kill his son to prove that he loved God. Abraham raised the knife to him, about to do it, and God called it off—pleased that he would have done it.

Does that sound like a moral God to you? This is just a tiny sample of the inconsistencies and moral problems with the Bible. There are far more linked in the notes. Go to the passages. Few dispute that these other stories predate the Judeo-Christian Bible, or that the Bible is full of massive contradictions, so we really have two main explanations:. Every Sunday I put out a curated list of the best stories in infosec, technology, and humans to over 20K people.

Not The Bible -- The Ultimate and Eternal Parody

This would drown men, women, children, babies and infants, as well as eliminate all of the land animals and birds. God knew of one righteous man, Ut-Napishtim or Noah. God ordered the hero to build a multi-story wooden ark called a chest or box in the original Hebrew , and the hero initially complained about the assignment to build the boat. The ark would have many compartments, a single door, be sealed with pitch and would house one of every animal species.

A great rain covered the land with water. The ark landed on a mountain in the Middle East. The first two birds returned to the ark. The third bird apparently found dry land because it did not return. The hero and his family left the ark, ritually killed an animal, offered it as a sacrifice.

The Babylonian gods seemed genuinely sorry for the genocide that they had created. The God of Noah appears to have regretted his actions as well, because he promised never to do it again. 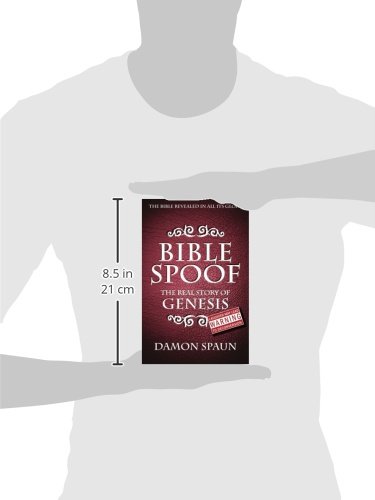