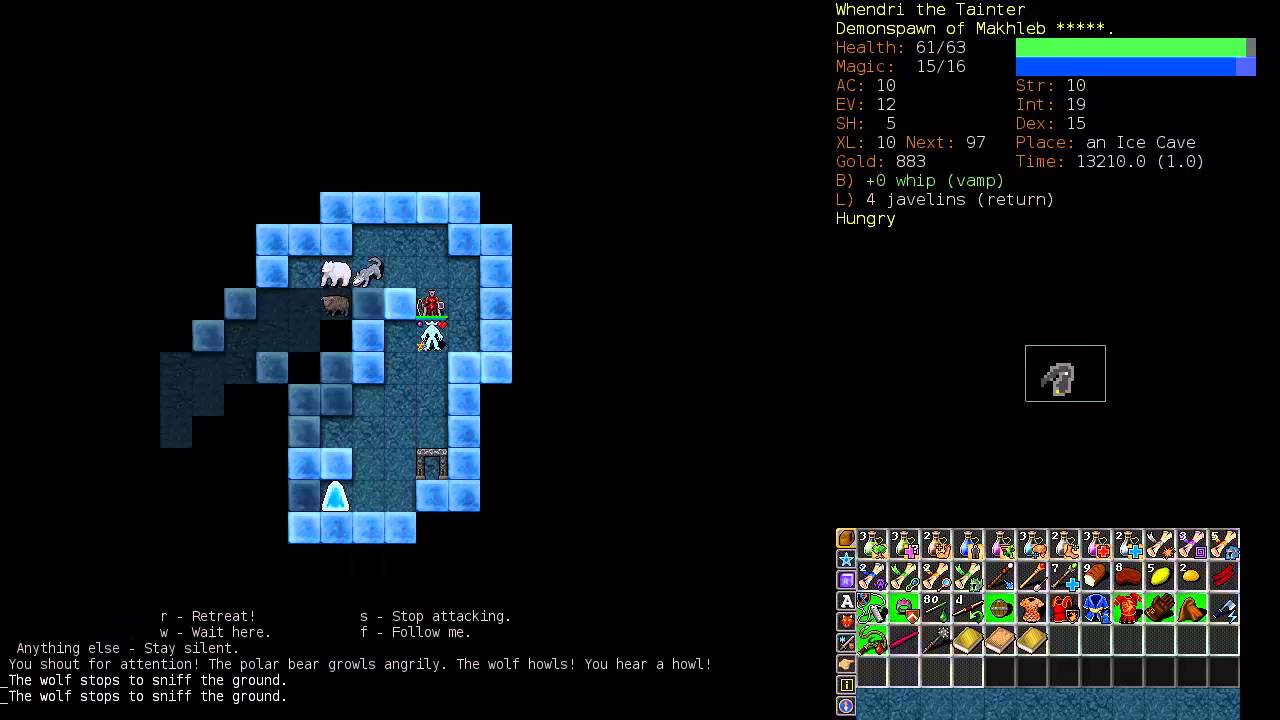 What to do and When. First of all, ive seen a lot of people saying "hey, but that character is just crap, i used it until lv30 and its useless" well then, if youre one of those, please keep reading. The Demonspawn is a class only possible to acquire if youve got all dlcs, so if you wanna make it worth, heres these weird steps to increase your chances of enjoying the class. Level before we start, this one is about magic Level reset Mana Pool: Level reset Demonic Prescence [passive]: Level put 1 point on all of these Mana Shield: Messire Hilt 13 Apr 4: There is absolutely no point of leveling mana pool, only if you want to loose some skill points.

You can have high mana leech from a weapon, it gains you mana faster then a mana pool ability and such weapons are dropped every time. Try a fire mage of Vehemet.


If you're going melee and armor and get the -STR mutations; or if you're going with Oka and get tons of puny demonic guardians, then yes. I'm another player who's first rune win was with a DS and I had a bunch of multi-runers mostly not winners! My tip would be that you should be flexible and play to the strengths of whichever set of mutations you get, picking an appropriate god and spell-set.

Although I'd still say that there are some mutations that are definitely more desirable than others Thursday, 23rd December , Demonspawn seem so incredibly weak Feedback on the individual DS mutations is very valuable: This strikes me as a rather mediocre set but I am in no position to actually evaluate. Tuesday, 18th January , In general I like the direction the mutations have been going--I am not longer as disappointed that I got a certain mutation as I used to be.

I don't like talons when there are hooves because hooves are better. Dearest Steve thanks for the gym equipment the plane crashed. Demonspawn seem so incredibly weak pubby wrote: Demonspawn seem so incredibly weak Hooves are still better than talons you lose the slot in both cases. You sometimes regain a lot of magical energy from taking damage. And as minmay and Tenaya say, it seems to do little, but it actually does kick in at times. Since casters at 0 MP have a tendency to reach 0 HP real soon, this mutation can be really interesting.

Also a nice idea to couple it with "Guardian Spirit, even if its not quite perfect. Since this particular mutation can be made arbitrarily strong with only number tweaks --and easily overpowered-- we just need a little more input, and can then change it or not, depending on what we get. So anyone here who got it and made actually good use of it? Design-wise, it was an attempt to have a "go casting" DS mutation. That's not so easy, and there were a number of purely physical mutations already. Thursday, 16th December , Demonspawn seem so incredibly weak galehar: But if there's only a problem with the power, we can keep it passive.

In general, I think that passive abilities are better than active ones -- HP2MP wouldn't be spammed, so it'd be okay. Was someone in crawl-dev afraid of abuse? I cannot imagine that that's a good course in actual situations. Monday, 17th October , Demonspawn seem so incredibly weak I had a demonspawn VM make it quite far, it is easily a winnable combo.

Friday, 15th July , Demonspawn seem so incredibly weak Currently I'm running a DsCj of Vehumet with hooves, slimy green scales, powerful demonic guardian, powered by death, and robustness. I always like hooves, and slimy green scales aren't necessarily bad. I think they should confer rPois earlier in the stages of mutation, as I didn't gain rPois until I was in the 20s.

By then I had enough other sources that it was irrelevant. I don't think this is a big deal, though. Demonic guardian and I have a lukewarm history together. I feel like the intention -- demon buddies show up during high tension to help fight -- is good, but they frequently just sit around since I don't want to waste a turn shouting at them when I have other shit to do hasting, conjuring, hitting.

They're typically relegated to the role of following me into a hallway to get beaten up while I sublimate blood. This might just be a problem with the very nature of allies in hallways, but I dunno. I'm not sure about this stuff. Robustness is incredibly boring, yet it is one of the most desirable DS mutations. It goes really well with the powered by death mutation, which I didn't think much of before, but has been utterly insane paired with a troll leather armor and the ring of vitality.

In the midgame I was regaining 6HP per round if I was surrounded by bodies and had the ring on. It's not quite as useful now that I've cleared all the early branches, but I think that's a good thing really useful during parts of the game, situationally useful during the rest. All of my mutations taken as a package are incredible, and saved my game in Tomb when I ran into a pack of eight or nine Sphinxes. I ice stormed them, but it wasn't quite enough to kill them in one round. They paralyzed me on the next round, and got a load of smites off but ultimately were finished off by an executioner.

Demonspawn seem so incredibly weak I don't really know if mut tweaks really will help. Unless you get them early, your ability to mutate is null during the hardest part of the game. I think if we could be guaranteed a early mutation, this might ease up on the pain an early DS has.

Demonspawn seem so incredibly weak Here are the results of a not so short crawl-dev discussion: Powered by Pain is replaced by getting MP from killing casters. Following Okawaru silently prevents Demon Guardian from coming up. Tentative new DS mutation: Nightstalker is strong but not always fun, as exploration takes much longer.

Beyonce real face - its a demon - Spawn of Evil

Some player quit when they get the monstrous DS set. Is this a concern? For this message the author dpeg has received thanks: Saturday, 24th September , Demonspawn seem so incredibly weak Losing 3 armour slots in exchange for losing scales seems like a straight up downside no matter how you slice the monstrous set. I've never liked it. Demonspawn seem so incredibly weak It can be useful for UC Ds.

Demonspawn seem so incredibly weak I don't really think monstrous is a problem but I think making claws do something for non-UC characters could be good anyway and that would also make monstrous more attractive. The augmentation change sounds good. The powered by pain change also sounds good for gameplay though it might make it feel kind of similar to powered by death, not sure if this is a bad thing.

Wednesday, 14th September , Demonspawn seem so incredibly weak My only concern with Ds, is not the final set of mutation, but the order we get them. Related Demonspawn: On the Run